This blog post was originally posted here on youngpeoplefor.org on June 26th, 2015.

About a week ago I walked twenty five minutes to the closest Forever 21 in pursuit of a professional-looking jacket at a reasonable price. I had to look extra-professional because I was going to be playing the part of law student at 9am the next morning.

As a part of my internship with Young People For (YP4) this summer, I’ll be helping to engage young people in the courts and raise awareness of the importance of judges and the judicial system to advance progressive causes. Because of this, I was given the opportunity to attend the American Constitution Society Convention, a conference for law students and lawyers so I could learn more about the courts and their impact on our everyday lives. 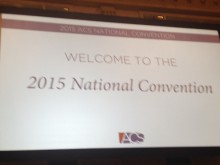 I was surrounded by people in suits. I was probably the only one there who was twenty and couldn’t legally drink at the reception. People were surprised—and impressed—to see that I was only a college student who was there to learn. I was given lots of advice on law school—that it’s worth it, that it’s the worst, that I should go, that I absolutely shouldn’t. 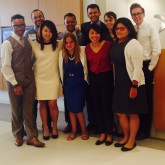 Despite receiving conflicting advice, I learned a lot—both in and out of the panel discussions and speeches. I attended panels on Title IX, pregnancy discrimination in the workplace, mass incarceration, and I went to a workshop on writing Op-Eds. I listened to distinguished law professors from top law schools, I listened to Wendy Davis speak about reproductive freedom, economic inequality, women’s rights, and the ways in which these three issues intersect with each other, I attended a Q&A with—wait for it—Supreme Court Justice Ruth Bader Ginsburg. 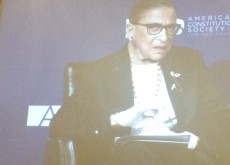 I learned so much. I learned from inspiring, knowledgeable individuals who had a real impact on addressing social issues and equality for marginalized groups within the legal system.

It made me think: would a law degree be a ticket to being one of these people?

But then other thoughts came to my mind: would I be smart enough? Then I looked around the room: most of the people there were white, and most of the people there were men. Most of the universities that were represented were Ivy League. Would I survive in a profession that only caters to a certain demographic of people? A law degree could cost upwards of $80,000 a year for three years. Then there are application fees, LSAT exams and preparation expenses on top of that.

Something that I thought was missing from the convention was addressing how we get people to go to law school so then they can become judges and fill spots in political offices, the Senate, and the Supreme Court in the first place. Because right now only a certain set of financially-able individuals are encouraged to go to law school and are put on track to get there.

If we truly want diversity on the bench and in the legal profession, then we need to start encouraging people of different backgrounds that they should and are capable of successfully receiving a law degree. We need to carve a space for those who belong to marginalized identity groups so then the space doesn’t seem to only belong to predominately white, upper class males.

Too many people get turned off if they feel like they’re going to be in a space where they won’t be valued, heard, or represented.

We need to start churning out lawyers and politicians and other professionals that can understand a wider demographic of people who are really committed to addressing inequalities.

At the closing of the convention, I sat there and listened to Ruth Bader Ginsburg discuss the sexism she faced in the workplace and I listened to her tell the story of how she struggled to get her first job. Employers told her directly that they didn’t want to hire her because she’s a woman. It’s scary to think that that wasn’t that long ago.

But then they showed us pictures of t-shirts that Justice Ginsburg’s fans made and I thought about the incredible influence that she’s had on many lives and in many monumental court cases. Through all the adversity and discrimination, she made a real difference and that’s worth noticing and celebrating.

Now we just need to pave the way so that more people have the opportunity to get there.