The hashtag MaybeHeDoesn’tHitYou was started by Afro-Latina artist and writer Zahira Kelly to raise awareness of abuse that isn’t physical or visible. From there, hundreds of women shared their stories of abuse online.

This hashtag became a powerful means to highlight accounts of verbal abuse, control, and manipulation—revealing that there doesn’t have to be physical violence for a relationship to be abusive.

Even though this hashtag is now a couple weeks old and time moves fast on the internet, I wanted to bring this up today. I went to a local bookshop last night to look for summer reads and as I approached the cashier to buy a book, I overheard her talking to her coworker.

“People don’t notice emotional abuse,” she said. The woman she was speaking to nodded. “They don’t notice the difference between a bad relationship and a normal one.”

But I remember she said this: “A scary number of them resonated with me.”

Then she said: “It reminded me of some of the things my boyfriend used to do.”

If this hashtag reveals anything, it reveals the scary reality of emotional abuse and manipulation and how common it is. It also reveals how difficult it is to recognize given the very narrow healthy vs. unhealthy relationship narratives we’re given.

We need to move beyond the “well, there isn’t physical violence” narrative as a means to recognize a harmful relationship. We need to move beyond ideas like “boys will be boys,” and “that’s just how things are.” The hashtag challenges this normalization and opens our minds to the fact that other forms of abuse—emotional manipulation, humiliation, control of who you can see and what you can do—to name a few.

That’s why we need to have these conversations. I think this is where the internet and social media come in as an ideal platform to start a dialogue on this.

Like the woman I overheard in the bookstore, this hashtag struck a chord with many people, including myself. In the moment, it can sometimes be difficult to label and recognize your experience for what it is. Especially given that our relationships take place within a context and a culture that downplays and normalizes bad relationships and problematic behaviors.

Here are a few examples of abuse women wrote about using the hashtag: 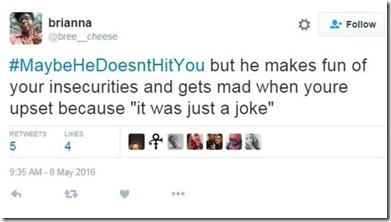 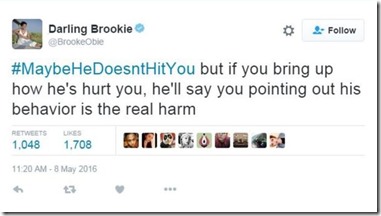 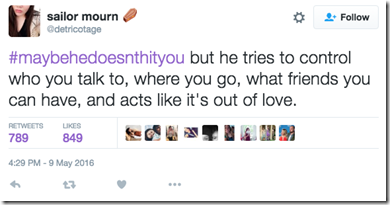 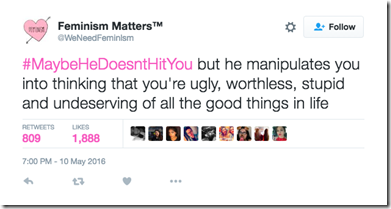 More stories can be found here.

That’s why this is important. These are real stories and experiences and we need to make sure we listen to them and know that this is not okay.

This post was originally written for TheIthacan.org on April 19th, 2016

*This post is in response to the recent Public Safety Alert, which can be viewed here.

A couple of days ago, my phone buzzed with an alert from Public Safety. Since I’m not based on campus this semester, I oftentimes overlook these emails. But this time I saw that Public Safety is investigating a report of “forcible touching.”

Forcible Touching? I think what they mean is sexual assault.

According to the Rape Abuse and Incest National Network, “sexual assault is a crime of power and control. The term sexual assault refers to sexual contact or behavior that occurs without explicit consent of the victim.” Last time I checked, unwanted touching falls under this definition.

We need to call it what it is.

Not acknowledging someone’s experience like this, is feeding directly into rape culture.

I get it, the phrase “sexual assault” is scary and we don’t want to admit that it happens at Ithaca College—but it absolutely does. According to a report on campus sexual assault published by the National Sexual Violence Resource Center, 1 in 5 women are sexually assaulted during college and 27% of college women have experienced some form of unwanted sexual contact. On top of that, 90% of these crimes on college campuses are never reported.

So can we at least support those who do actually come forward? Can we validate their experiences? Can we call them what they are?

Maybe, if we do those things, one day there will be culture on college campuses where survivors feel safe in coming forward if they choose to.

Because right now, this inability to even give sexual assault the proper label, points to how seriously we take it.

It’s downplaying the problem. And framing sexual assault as “touching” instead of a violation only implies that sexual harassment and unwanted touching and contact is not the worst thing in the world, that—like consensual touching—it happens sometimes.

To make matters worse, according to psychologist Lynn Phillips in her book Flirting with Danger, women and girls receive such conflicting messages about love, relationships, and male aggression that they struggle to even name their victimization and experiences. If we don’t call sexual assault what it is in official reports, it makes it that much harder for victims/survivors validate their own experiences.

Yes, even something as simple as a Public Safety email can reinforce to readers that their experience isn’t valid, that it won’t be called what it is, that coming forward isn’t worth it.

As a writer, I can tell you that the words and the language we choose has an impact.